Kuhnert Gebäudeservice in Celle has been active on the market for more than 80 years and offers various services related to buildings and manufacturing facilities. That includes the cleaning of glass surfaces, facades and photovoltaic systems, but also services such as surface grinding, PVC and linoleum restoration, and the deployment of mobile cleaning teams.

The company is also the inventor and trademark owner of clean-check®, a quality measuring system for process optimization in facility management.

That enables better control of the agreed services to achieve fair and objective results for both client and service provider.

The family business employs some 600 people in the region. For Kuhnert Gebäudeservice, the overall service itself in buildings and manufacturing facilities is always a welcome challenge which have to be overcome.

Kuhnert Gebäudeservice already has its own network infrastructure in the form of two host devices from well-known manufacturers, on which the company runs four virtual servers each. The two hosts, therefore, are also designed to have a high processing power to operate the virtual servers reliably with quick response times. However, the company’s memory requirements grew over time, but the budget did not allow for a server upgrade until the following financial year. A short-term solution had to be found to expand the memory in the network. This extension is designed to be sufficiently flexible for seamless use with future host devices. The performance of this alternative is also significant, because the company relies on virtual servers. What is more, downtime—the period in which the server and the associated services and applications cannot be used—needs to be kept to a minimum so that the company’s productivity is not restricted unnecessarily.

A further key point for the business is the ability to manage the memory independently and locally at no additional cost.

To meet the increased memory requirement quickly and easily, Kuhnert Gebäudeservice is relying on the TeraStation 51210RH network storage, a 12-bay rack-mount NAS for businesses which need a reliable RAID storage system for their business-critical applications, in addition to the two existing host devices. That way, the company also avoids a longer downtime and high expenditure, which would be unavoidable if the server structures were changed completely. Furthermore, the NAS can be used not only with the previous hosts, but also with future devices. The powerful hardware integrated into the NAS also enables the desired virtualization.

The TeraStation 51210RH has a highperformance Annapurna Labs® Alpine quadcore processor with 1.7 gigahertz and eight gigabytes of DDR3 ECC memory. This provides enough performance to easily handle data transfers and common NAS functions. The device is available partially populated with four hard drives, or fully populated with twelve hard drives and up to 120 terabytes. This is therefore ideal for growing companies that want to start with a smaller initial investment, but want to leave room for expansion in terms of storage space.

JBOD and conventional RAID classes 0, 1, 5, 6 and 10 are supported so that users can count on maximum data transfer rates and also on the highest level of data security in the event of hard disk failure. Two integrated 10-gigabit Ethernet ports ensure reliably high transfer speed at all times.

The device not only offers high computing power, but is also VMware-ready. This means, for example, that the NFS (Network File Service) and iSCSI (Internet Small Computer System Interface) protocols are supported to enable access to the network’s memory resources. That is why Kuhnert Gebäudeservice has also decided to run the previous virtualizations on Buffalo’s TeraStation. To that end, new drives were created via iSCSI, and the existing VMs (virtual machines) were copied to it and put into operation. Since then, the company has been running domain controllers on the network memory, mail and file servers, administration software, terminal servers including office packages, print servers and quality management systems. This last application is particularly important for the company, which constantly needs to scan large numbers of documents, be it for archiving or to meet documentation requirements. When it comes to virtualization technology, the company relies on Microsoft’s Hyper-V.

Thanks to the TeraStation, Kuhnert Gebäudeservice can sidestep the conventional, significantly more expensive version, which would also require the company to choose between solutions in the form of Direct Attached Storage (DAS) or Storage Area Network (SAN) via Fiber Channel. Both rely on extremely expensive interfaces such as Fiber Channel (FC), host bus adapters and switches, which are necessary for communication. Although the performance is even higher and therefore often in use, they are too expensive for the additional power they provide, particularly for small and medium-sized companies. Despite doing without the sophisticated FC protocol, Kuhnert Gebäudeservice is satisfied with the performance.

It would also be possible to provide the data and services in the cloud, but Kuhnert Gebäudeservice deliberately decided against it because the company wants to manage its data locally, independently and without further followup costs. For backup purposes, the contents of the primary memory are replicated in real-time to an independent TeraStation 51210RH located in a separate fire protection area. Therefore, if the main memory fails, work will continue without delay using the backup. Domaincontroller / Mail- and Fileserver / Administration-Software / Terminal server (including office packages) / Print Server / Quality Management Systems Primary local network storage NAS 1 Local Backup NAS 2 Real-time

"Above all, it was important to us to find a short-term solution to our storage problem that would be easy to integrate. We hardly noticed anything about the upgrade and were able to stay focused on the business.“

Benefits for the Company

A prolonged server shutdown would severely impede the everyday work of Kuhnert Gebäudeservice, as many productive applications run virtually on servers. E-mails could neither be received nor sent, the website would not be accessible and documents could not be saved as a scan—access to necessary documents would then also be impossible. Even important correspondence such as quotes or invoices could not be created or amended, because the Office package also runs virtually on the servers. Thanks to the Buffalo TeraStation, the company can now take its time in buying new primary host devices, which can now be completely designed for high performance since the Buffalo solution takes care of the memory side of things. What is more, the business benefits from relatively effortless implementation of the TeraStation due to the high functionality, the sophisticated equipment and the support of a number of protocols and services.

Of course, the TeraStation 51210RH is also able to synchronize the data with various cloud services such as Microsoft Azure Blob, Dropbox® or Amazon S3. So far, Kuhnert Gebäudeservice has not taken advantage of that possibility. In addition to internal documents, the TeraStation also contains sensitive files such as customer data, which must be protected against unauthorized access at all times. Local selfmanagement of that data guarantees protection. In a cloud, on the other hand, sensitive data falls into the hands and responsibility of a third-party provider, which means a certain loss of control. But that is not all: it can also save money, because with network memory there are no additional monthly costs for management of the cloud memory.

In the event that a hard drive fails, the TeraStation will deactivate the drive to enable it to be replaced without loss of data—that is possible thanks to the hot-swap feature. Of course, there is also a number of ways to back up the data on the NAS. The TeraStation 51210RH comes with 11 licenses for the NovaBACKUP® Buffalo Edition software, a complete data security solution. Moreover, the network memory also supports rsync. Backup copies of the TeraStation can therefore be stored on rsync-compatible devices from other manufacturers as well—and vice versa.

Owing to the power of the TeraStation 51210RH, Kuhnert Gebäudeservice can continue to use its virtualized services and applications in the short term. Even if the current primary devices are replaced in future, the network memory can still be used. This saves not only a great deal of precious working time, but also money. The conventional alternatives would be DAS or SAN solutions via Fiber Channel, which would provide even greater performance, but would have been considerably more expensive due to the complex infrastructure.

Remote access to the TeraStation 51210RH is possible via an FTP browser, WebAccess or cloud synchronization functions. Since the access options can be defined in a fine-grained manner, each user only receives the data and services relevant to them, so that even sensitive data is extensively protected. Irrespective of this, employees and customers can access the services, data and applications at any time via Internet-capable devices, whether mobile or stationary.

Security against cyber attacks, ransomware and theft are top priorities for Buffalo. The TeraStation Series NAS systems are closed systems that do not even assign root privileges to the administrator. That way, Buffalo is able to prevent the installation of unsafe third-party applications which would pose a risk of malware and virus infections. Connection to various network services can also be further restricted by disabling LAN ports or services. This reduces potential risks even further. Even the entire installation of the TeraStation is carried out locally, meaning no active Internet connection is required. Moreover, no user accounts are created for remote maintenance because cyber criminals could steal the usernames and passwords.

The hard drives in the NAS devices can also be securely encrypted with the strong AES 256-bit standard. Even if the drives are stolen from the network memory, the data stored on them cannot be read—even on other TeraStations. Data transfer is also encrypted, which can be done via HTTPS. SFTP (SSH File Transfer Protocol) is also supported, which enables the secure exchange of data between host computers.

Buffalo also offers an optional license for virus scanning software to prevent infection of the entire network. If infected files are transferred to the NAS, the software detects them and either removes or quarantines the affected files, depending on the settings, to protect other systems in the network and prevent a systemwide infection.

Even if the network memory itself is stolen, unauthorized persons will not be able to access the memory. An activatable boot authentication, which is performed when connecting via a VPN or to a server or PC, ensures that the network memory only starts up on successfully authenticated devices.

If this is not the case, the NAS will not boot. Potential thieves are therefore unable to use the device or access the data. Incidentally, the data is automatically encrypted with active boot authentication, as mentioned above By mirroring all the data from the main device to a TeraStation in another fire zone, all data remains available even if there is a technical problem, fire, or water damage affecting the NAS. With just a few settings, the backup can be put into operation immediately and the data restored to a new primary device without complication, saving time.

Buffalo provides Kuhnert Gebäudeservice and all other customers of the TeraStation with a 5-year warranty, as well as the Buffalo VIP customer service. The latter includes advance exchange of devices and hard disks. In the event of a hard drive failure, the exchange will be made within 24 hours. This ensures that a technical problem does not lead to a longer work stoppage. Fast assistance is also available from Buffalo Technical Support via the telephone hotline.

"The security features of the TeraStation create confidence, so we can be sure that sensitive data is always protected against unauthorized access. In our industry, data protection is a precious commodity which the end customer appreciates in particular." 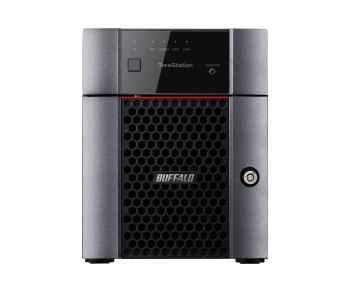 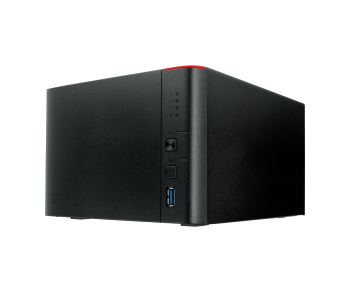 All your data accessible and secure. 4-bay consumer NAS. 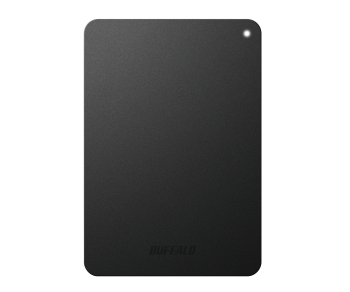